Skip to content
From our reader Scotty:
“I went to see this show last night coz’ I love Lea DeLaria, but the play was bad. However, I was very pleasantly surprised when the male lead, Michael Bakkensen, came out in the first scene in a towel. Michael is a tall, curly-haired stud with a defined chest and tasty little tits, and I was hoping the towel would come off. Lo and behold, it does, when he’s surprised by the lead woman and the towel falls. You first get a nice glimpse of his very round fuckable ass, two perfect muscled cheeks. Then he tries to cover himself with drawings he’s done, but not before you catch a glimpse of his junk–brown fluffy bush, an average size cock and nice jiggly full round plum-sized balls. He covered himself up before I could make out whether or not his prick was cut or uncut, but unless my eyes deceived me, I think I might have made spied a cap crowning his love meat. Later he wore black sweat pants, which made his schlong stick out nicely. A note on his dick: it looked average size, but very tasty and maybe it was bigger than could be glimpsed. I assume, given the strapping size of Bakkensen, that he’s a grower.
I can’t say the play was worth it but Lea had a couple funny bits. No mistake: though Michael Bakkensen’s nudity is quick, it’s ass and frontal, and he’s gorgeous. An actor well worth looking out far.” 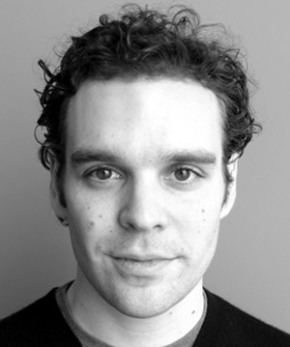