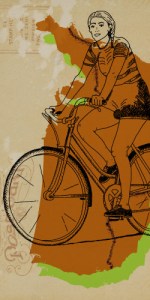 Penny’s boyfriend exclaims, “Oh God, you’re so emotionally distant. I have to have you!” She is damaged. She doesn’t know who she is or her place in the world. So she drops everything to go on a cross-country bike trip from Boston to Santa Barbara. Along the way, Penny meets a colorful crew of bikers, from the lesbian couple (they’ve decided to get a marriage license in every state they hit) to the mysterious Man with the Van (he transports their stuff). As the bikers travel through iconic towns across the country from the far North to the Deep South, Bike America captures the restlessness of a millennial generation that will go to any lengths to find a place that always seems just out of reach.

P.S. The character Ryan is rumored to have a nude scene.