I have been browsing the shows of 2013 NYC Fringe Festival but I think it will be a dud in terms of male nudity. So fuck the Fringe and let’s support the 1st Annual UNFringed Festival at The Secret Theater in Queens!

From Duncan Pflaster, playwright of TAINT OF EQUALITY, comes “Fourteen Hundred and Sixty Sketches of Your Left Hand”. I heard everyone in the show gets naked at some point.

When Blanca invites Paul to her ranch in New Mexico for the Summer, he thinks it’s for an artist’s retreat, but it’s also to help keep his gay bromantic college buddy Alonso, Blanca’s brother, on his medication. Tormented painters, sexual obsession, and crossed boundaries combine for a scorching new play.

Part of the first annual UNFringed Festival at The Secret Theatre in Queens.

Tickets: $15 in advance at www.secrettheatre.com, $18 at door

The Secret Theatre is holding their first annual UNFringed Theatre Festival, dedicated to giving the stage to unique new works. With multiple performances and each show receiving prime slots, UNFringed strives to give each work the visibility it deserves.

Play contains nudity and sexual situations and is not for children.

Here are some photos from the show: 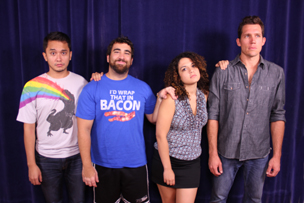