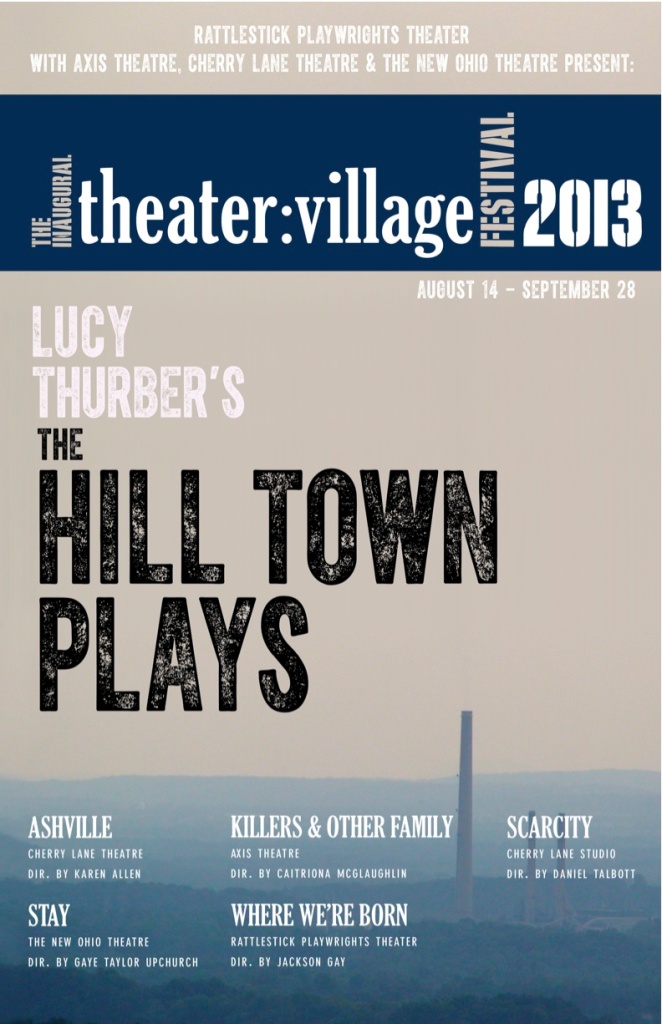 Lucy Thurber's work is being given a spotlight in THE HILLTOWN PLAYS presented by Rattlestick Playwrights Theater, from August 14 to Sept.28, a collection of new and existing works, which "tells the story of a woman who works her way into a new life from a childhood of poverty, alcoholism and abuse. Each play examines a pivotal stage of the character’s life, spanning from a childhood in a poor mill town in Western Mass through adulthood as a successful author. The Hill Town Plays investigate where we come from, what we dream of becoming and who we are."

One of them is KILLERS AND OTHER FAMILY. Honestly I vaguely remember the play buy it came back to me as I saw the opening scene. This time, it wasn't as shocking as I first saw it. It is still one of her weaker works even after the changes they have made . SHANE MCRAE reprises his role as Danny, the childhood sweetheart of the protagonist Elizabeth. He is eerily scary in this role.  I believe him completely. In the original Rattlestick production  back in 2001, I don't remember the extended nudity he had as compared to this current production so I better catch it. I remember reviewing the earlier version in my old blog and I complained then that I only got to see Shane's ass so quickly. This time his ass was staring us right in our face for more than a minute. And as he gets up and puts on his pants on, I got a view of his hairy ass and his magnificent low hangers. And by the way, he also spends most of the play shirtless so we have a lot of chances to ogle his nips, his armpits and nice bod. He has kept himself fit all these years and still so yummy. The AXIS THEATER is a tiny theater. I wasn't able to choose my seat because it was assigned but the seats closest to the entrance probably can see Shane's cock. I guess you won't be able to see both, wither you see his cock from the side or see his ass and balls from behind. The rest of the cast were excellent but the thinness of the materials with so many loop holes resulted in a somewhat moderately engaging play.  It is a one act, and not a fully realized play. But hey, this was one of her earlier works so we can see her evolution as a writer of when you see her other works. But still, it is an enjoyable evening. The set, lighting and music were excellent.

Try to catch Shane until Sept.28! Worth seeing his body once again on stage!