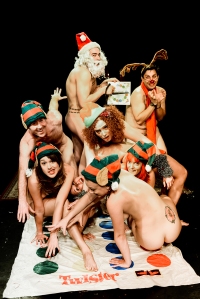 Reposting this excellent review from FIPines just in case you guys missed it:

“Saw Naked Holidays 2013 this past Saturday. First of all – this is a different venue/format than previous shows. It is now performed cabaret style in Chris Noth’s Cutting Room night club. So, floor show, tables, food/drink minimum, etc. Venue has its good and bad points. Can be pricey with $40 cover + $20 minimum. Got $20 tix on Goldstar – so use that agency to save a few buck. Even though there is an elevated stage, some of the “scenery” is blocked by the heads of people closer to the stage. Get there at least 45 minutes before showtime to score a table close to the stage. The show also changed – some of my favorite vignettes are gone and replaced with newer ones. I liked earlier shows because of the sick, funny, and clever humor. This production did not seem as funny and found myself laughing out loud less. Nonetheless, I enjoyed the show because of the huge amount of exposed dick. There seemed to be more guys than gals in this production. The emcee – Phil – is an ordinary looking chap (which I like.) Hubby and I gasped when he exposed his nice, uncut dick during the finale. We especially liked when he pulled back his foreskin and explained that his parents spared him the mutilation. Another new face is a guy, Jack I think, tall over 6′ gorgeous beef – more of a grower than a shower – but what an ass!!! I would have risked divorce if there was a request for someone from the audience to rim him on stage. Actually, all of the men – at least 8 of them – were more growers than showers. The “weredeer” from last year (they did not do the skit this year) was in the show but, oddly, kept his clothes on. If you recall last year he was definitely the alpha male and I was disappointed that he did not show his massive cock this year. Interestingly, the male band members alternated with playing music and participating in the skits. After the last skit, the trombone player went back to the band area and started playing the trombone buck naked with his dick swinging – I found this oddly erotic. I give this 5 stars for nudity and 3 wet spots on my khakis. Watching the naked trombone player got my panties soaking wet. I went home and blew hubbie. Go see it for the great dick – but less funny skits and an expensive venue.”