And our winner is CORY MICHAEL SMITH in Breakfast at Tiffany’s! 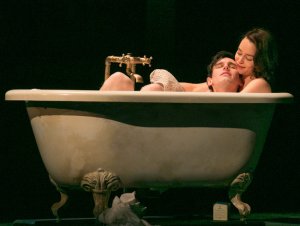 Cory Michael Smith, who played Fred opposite Emilia Clarke in the Breakfast at Tiffany’s will be with Frances McDormand for a leading role in Olive Kitteridge, HBO’s four-part miniseries adaptation of the Pulitzer Prize-winning novel by Elizabeth Strout with Tony winner McDormand in the title role. Smith is the co-star of Twilight headliner Kristen Stewart in the forthcoming indie movie Camp X-Ray, in which they will play American soldiers at Guantanamo.

Here’s his nude scene from Breakfast at Tiffany’s:

Thanks to David Asset for posting this on his blog.