Just got back from seeing “Sex Tips for Straight Women From a Gay Man”  off-Broadway at the 777 theatre.It ‘s a very funny show, only about 1hr and 15 minutes. Jason Michael Snow is great as the gay writer of a book of sex tips for women. Lindsay Nicole Chambers is also great as the host of the meeting. The gorgeous Andrew Brewer plays her assistant who strips down to a tight shirt and bikini briefs for a lot of the show. A lucky female audience member gets to feel his chest. At the end he does a striptease down to a thong. He turns and you get a good view of his ass. It was a really enjoyable show except there were a lot of women in the audience and if you have ever been to a strip club with women then you know how they act.

There is a discount code  TIPSMANIA1 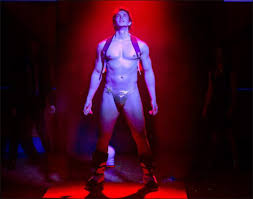 Sex Tips for Straight Women from a Gay Man     777 Theater

Synopsis: In this new three-character comedy featuring a straight woman, a seductive model, and you-know-who, audiences are welcomed into a fun-filled world of foolproof moves and insider advice that could only be culled from that most insightful of individuals: the gay man. Sex Tips for Straight Women from a Gay Man is based on the international best-selling book of the same title.