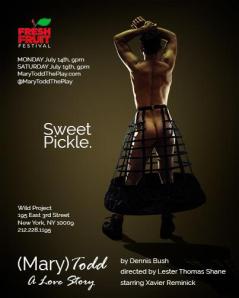 I meant to post this earlier in the week but time got away from me. Caveat: This production is unfortunately closed so some of you reading this may be disappointed.  It was part of the Fresh Fruit Festival so there were only two performances. However, the audience reaction was very positive so fingers crossed we will see additional performances in the future.

I very much enjoyed this show. It is a one-man performance that tells the story of Todd Lincoln, a former stripper who believes he is the reincarnation of Mary Todd Lincoln (he starts off the play in full Mary Todd drag). Masterly played by Xavier Reminick, Todd tells the story of how he met his husband Abe (natch), the life they built together, the death of Abe and the heartbreaking aftermath. The story of Todd and Abe is equal parts raunchy, hilarious, tragic and sweet. I spent most of night laughing my butt off only to find myself fighting back tears in the end.

Reminick is amazing in this role – he really makes you believe in Todd as a person. He is very talented and I hope he will have a very successful career.

As for the nudity, there is plenty! After introducing himself in full Mary Todd drag, Reminick proceeds to remove the outfit, revealing he is not wearing any “pantaloons” under the hoop skirt, giving the audience a full frontal view. After standing around dressed only in a corset, Reminick slowly redresses into a pair of black shorts. Later in the show, he takes off the shorts and corset and gets redressed into another dress. He then performs a strip tease, getting completely nude again and showing off to the audience before slipping on a shirt and pair of shorts. Towards the end of the show, he is nude one more time as he changes back into the original Mary Todd dress. Reminick is lean and tan, with a firm butt and smooth chest. His dick is fabulously thick and uncut, with trimmed pubes. He is fearless in his nudity and it shows – there is no awkward hiding or turning away from the audience.

Hopefully this is not a one-off production and we will be seeing Mary (Todd) on stage again.