Derek Ahonen has moved to Los Angeles after The Amoralists have banished him from the troupe.  He is still alive and kicking and his most well known work THE PIED PIPERS OF THE LOWER EAST SIDE will be playing there.  I think he did some minor tweaks including the prologue.  If I guess it right, JORDAN TISDALE, who showed us his thick black cock in HOTEL MOTEL, will be playing MATTHEW PILIECI’s role. I wonder if he will also play the part with the hard on. Oh, how I wish! 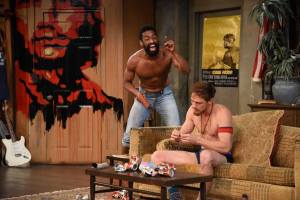 Idealism reigns supreme within this modern-day urban tribe in New York City. Billy, Dawn, Dear and Wyatt live in an extended sexual family where they battle their fears and addictions in order to live out their dream. Love, anarchy and building a better world are the goals, but squalor and desperation are only a step away. The Pied Pipers of the Lower East Side is a satirical look at the search for utopia and what happens when that bohemian paradise begins to fall apart. The show was an off-Broadway hit in NYC and comes to Los Angeles for a limited run at The Matrix Theatre on Melrose.You must be age 17 or older to attend this performance. The show contains nudity and sexual content.
Thru – May 24, 2015
Thursdays: 8:00pm
Fridays: 8:00pm
Saturdays: 8:00pm
Sundays: 7:00pm
Price: $30
Show Type: Drama
Box Office: 323-852-1445
Running Time: 2 Hours
http://www.matrixtheatre.com