Belarus Free Theatre returns to Chicago to stage William Shakespeare’s KING LEAR Founded in 2005 under Europe’s last surviving dictatorship, Belarus Free Theatre is one of the most outspoken critics of Belarus’ repressive regime and is banned from performing in their own country. Many company members have served time in prison, lost their jobs, gone into hiding or been exiled. Despite this, the company continues to create award-winning work with the support of artists around the world. 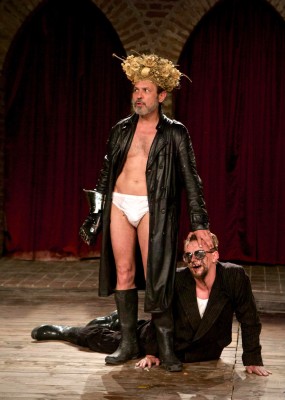 In another moment so visceral you’re thrown back in your seat, the character of Edgar (Siarhei Kvachonak), stripped bare, covers himself in his own excrement, achieving a level of debasement that the text surely demands but that few productions achieve.

This is a “Lear” that constantly strips away artifice, revealing all the tacky jiggles and flops of nudity and the doomed flailing around of those caught in the grip of a man who answers to no one but himself. Men like Lear are all the more dangerous when their powers are threatened. These actors have a real-life sense of that particular truth.