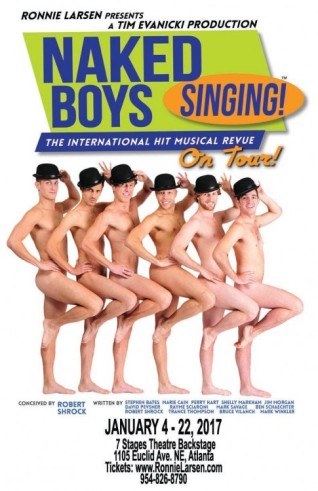 Currently there are two productions of Naked Boys Singing on Tour – one group is playing in Atlanta and the other plays weekly in Orlando.  They are part of the same tour group:

The Atlanta production is playing now until January 22.  A friend saw this group when they performed in Fort Lauderdale last year and said it was one of the best versions and casts of NBS he had ever seen.

The Orlando production plays every Friday and Saturday at Parliament House until March though future dates could be added.

For those in the New York area, NBS is still running off-Broadway at the Kirk Theater every Saturday.  Be aware: 75% of the audience seems to consist of bridge-and-tunnel bacherlorette parties.  Not sure how much the bachelorettes and their mothers enjoy songs about steam room cruising and locker room boners but a naked guy is a naked guy!  The NYC show website for NBS has not been updated in years so there is not photo of the current cast but Naked Boys Singing lives up to its title 100% and is always a fun time.  I recommend Googling for discount tickets – you shouldn’t have to pay full price.